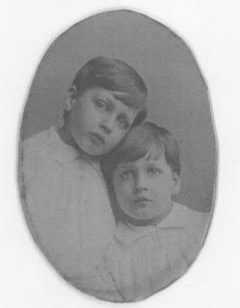 My father, Ernest Kennedy (for some reason he was always called Bob – perhaps because his middle name was Norbert. I never asked him why and now it’s too late), was one of five brothers. They were very close.

All five went to the same public school, Eton College. At the time they set a record for the most brothers at Eton College continuously for the most number of years. This was accomplished by my father being born as one half of twins and the other brothers not being that far apart in age from each other. The youngest arrived at Eton just as the oldest brother left.

The twins were identical. They were so identical to me that I called my father’s twin ‘Uncle Daddy’. In reality, he was my uncle Francis Jerome Kennedy aka Uncle Francie. Many years before me both the twins had married two society sisters on the same day in a joint wedding – it made the front page of the London Times.  I don’t know a lot about that as it was hardly ever discussed. I only know that my father had no children from that marriage (if I do have a step sibling – please contact me) and Uncle Daddy had two daughters, Yvonne and Pam. Pam gave birth to a daughter, Carolyn and a son, Barry.  Barry is older than me which is unusual because he is a generation below me.  I am still in touch with Barry and see him whenever I am in England.

Barry’s second wife, Lady Charlotte Curzon, gave birth to their only child, a son. His name is Richard Dinan and you may know him from being a star on the British Reality Show ‘Made in Chelsea’ .  Richard recently founded Applied Fusion Systems which aims to capture energy equivalent to that of the sun and send a rocket to Mars (seriously)!  Richard’s cousin, Cressida Bonas, (Prince Harry’s ex) is the daughter of Lady Mary Gaye Curzon (MG). (By strange coincidence, I once dated MG.) Incidentally, MG is 1960s “It girl” Lady Mary-Gaye Georgiana Lorna Curzon-Howe. Together with Charlotte, the two Curzon society sisters were well-known for their beauty.  Sadly, Charlotte passed away earlier this year. Eventually, both my father and Uncle Daddy got divorced. In those days, however, divorce was a big deal especially for Catholics, and they were all Catholics.

I don’t remember what Uncle Daddy did for a living whilst I knew him. Early on he must have been a stockbroker. I know he also worked for the Berlin office of my father’s company, Revelation, before the war (WWI) and that’s where he met his second wife, Lotte. Francie was, of course, dad’s favorite brother. I have a feeling that for awhile, my father looked after them both. Francie was also an inventor. The only invention of his that I can recall was a set of storage bottles with their lids fixed under a shelf. The bottles were removed merely by sliding the bottle towards you and put back by sliding it back into the lid. The purpose of this was so only one hand was needed to take out and put back the bottle into the air tight cap. He was aiming at a floating market – Yachts. After he passed away, his widow Lotte persuaded me to take his prototypes and try to sell them to stores. I remember going to one of them, Selfridge’s (one of the biggest stores in London)! It wasn’t long before I realized that the gift of selling was not a gift that I had been given. My father and Francie were fond of pranks and utilized their identical looks to that end.  For instance, I remember once in Johannesburg in the 1950’s Dad’s friends came over to pick him up for a dinner party but saw that he was still playing tennis. Seemingly embarrassed, he promised to get ready very quickly. He went into the house and came out fully dressed in his dinner jacket in less than one minute. The truth of the matter was that it was Francie (on holiday visiting us with his second wife, Lotte) who was playing tennis. He went inside to tell dad that his friends had arrived just as dad, dressed and ready to go, was about to come out of the house. Neither told of the reveal until later, which was just like a movie I was cast in, The Prestige (2006).

Dad loved to play tennis and every home we owned in South Africa had a swimming pool and tennis court. Every Sunday, there would be a tennis party where many of my father’s friends gathered regularly. It was always fun. Uncle Daddy lived in London, so unless he was visiting whatever country we were living in, I usually only saw him when we lived in England. The oldest brother was Uncle Sydney. During World War I, he was a colonel in the British Army and became Marshall of the Military Police. I remember him as quite an imposing figure. In later years, he ran Lavington Stud Farm, where he housed some of the greatest race horses of their time (eg. Secretariat). In his eighties, he was the chief polo umpire on ‘Smith’s Lawn’ where the Royals (especially Prince Charles) played polo. I rather think he died on his horse. The twins were next in line.

Additionally, my father and uncle daddy were both members of the Royal Enclosure at Ascot (the area where the Queen would watch the most famous horse racing event of the year). The event is famous for the hats the ladies would wear. Gentleman would wear mourning coats and striped trousers with black silk or grey felt top hats and in those days a stiff wing collar with a cravat, which is I imagine why in America a cravat, from the French word for tie, is called an Ascot). Unfortunately, after their divorces the Queen banned them from their membership of the Royal Enclosure.

As a young man I too was granted membership of the Royal Enclosure – it was very exclusive and involved a very complicated and antiquated application.  I don’t remember all the formalities but it was all done in the third person and and one would apply to the Queen’s Equerry.  If I remember, it started something like this: Mr. Clive Kennedy presents his compliments to…(The Equerry) and requests that he may be granted the honor of becoming a member of the Royal Enclosure at Ascot. There was a lot more and there were several hoops to go through to complete the process. I do remember there was a very thick engraved card – so perhaps I had to be invited before I even could request membership.

Initially, all the brothers worked in their father’s well known firm as stockbrokers – at least until my grandfather’s big crash (more on that in a later post). At that time, the time of the British Empire, Grandfather was the Senior Trustee of the London stock Exchange (today’s equivalent of the Chairman). I think Uncles Jackie and the youngest Algy (that’s what you get when you call your son Algernon) remained in the stock exchange most of their lives. As the odd custom of that time, the youngest, in this case Algie, was dressed as a girl. (see picture below)