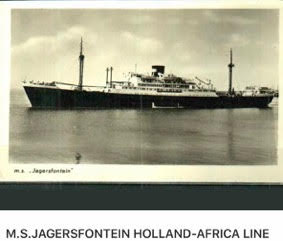 Before I was, I was.

This is a short video that shows what life was like aboard one of these grand ships during such a voyage as the ones I took.

In the 1950s and 60s the line operated a fleet of fifteen ships, eight on the principal weekly mail run from Southampton to Cape Town. Each ship could carry an average of two hundred First Class passengers and four hundred and fifty in Tourist Class.

To see more about these glorious ships, click on a name below:

Let’s start at the beginning…

I was born in England about eight years after my brother Graham, at a time when there was a shortage of everything and food was still being rationed (powdered eggs anyone?) as a result of a World War.

Whilst still an embryo I was “put down for“ (US translation “enrolled in”) both Eton, my father’s alma mater, and Roedean, a girls school – just in case. Founded by King Henry VI in 1440, Eton College lies just across the river Thames in Windsor. Yes, the Windsor where the castle is. It was quite a tradition for the men in my family to attend there.

Speaking of Windsor Castle, did you know the Queen found oil underneath? As if she needs anymore money.
Not to be outdone though, Roedean School, an independent day and boarding school for young ladies, was founded in 1885 in Roedean Village. Roedean lies just on  the outskirts of Brighton, in the East Sussex part of England.  The campus is near a cliff and overlooks the Brighton Marina and the infamous English Channel.  In those days, you didn’t know what the baby would be until it arrived. So covering their bets, I was enrolled in both. As it turned out, I attended neither.

At the age of three, I took my whole family and everything we owned, including cars and all our furniture, put it all in an ocean liner. We journeyed back and forth in this manner to South Africa several times always on a different ship.  There was the Transvaal Castle, the Edinburgh Castle, the Jagersfontein and the QE2, known arguably as the world’s grandest ocean liner. In South Africa, there was plenty of food and you could see the sun most of the year. The King and his family visited South Africa shortly after my arrival there, bringing with him his wife the Queen Consort and Princesses Elizabeth and Margaret. There was quite a parade when I (or was it they) arrived.

Before we could find a house to live in, I had my first automobile accident. Apparently I broke my leg with a greenstick fracture and it was bad enough that we all ended up in hospital for a time. We later resided in a hotel for several months. I remember the name – the Carlton hotel. I would go there many times later in my life for lunch or dinner.

For the next few years I enjoyed being a child in Johannesburg, having learned how to drive a pram, after which I turned to a makeshift go-kart for transportation and that was next followed by a bicycle.

Everyone in Johannesburg had a pool, so I learnt to swim.

I attended kindergarten, until the age of six or seven at which point, I decided to attend a boarding school called The Ridge .  I found out later this was what parents like mine thought their children should do. It is very much an English tradition and of course gets the children out of their parent’s way. As for attending school, I don’t remember having much of a choice.

A couple of years later I decided to go to a different prep school (boarding school). This one was located in England and called St Peters. It was not far from Brighton, a seaside resort. My recollections of Brighton are based on the occasional parental visit (unless they were in another country). It was usually at half term, and sitting in a rather dreary tearoom with the rain coming down or bravely walking along the beach (pebbles not sand) bracing against the chilly wind. This would be the highlight of my school term.

To be fair,  I vaguely remember summer at St Peter’s where they made all the boys lie out in the sun to sunbathe – 5 or 10 minutes on your back and then everyone turn over! No sunscreen in those days and too late to sue.

King George VI is the father of Queen Elizabeth II and Princess Margaret. His wife is Lady Elizabeth Bowes-Lyon. He ascended the throne after his brother, Edward VIII, abdicated to marry American socialite Wallis Simpson.

King George VI was an officer of the Royal Navy and Air Force and fought in World War I. He also suffered from a stammer that  required speech therapy. Colin Firth portrayed him in the movie, The King’s Speech.